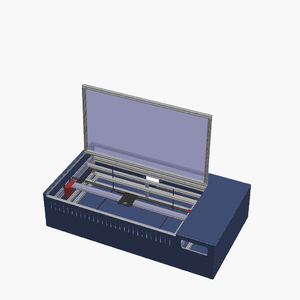 Laser cutting is a technology that uses a laser to vaporize materials, resulting in a cut edge. While typically used for industrial manufacturing applications, is now used by schools, small businesses, and hobbyists. Laser cutting works by directing the output of a high-power laser most commonly through optics. The laser optics and CNC (computer numerical control) are used to direct the material or the laser beam generated. A commercial laser for cutting materials uses a motion control system to follow a CNC or G-code of the pattern to be cut onto the material. The focused laser beam is directed at the material, which then either melts, burns, vaporizes away, or is blown away by a jet of gas, leaving an edge with a high-quality surface finish.

The laser cutter is a modified Buildlog.net 2.x 40W design. It has been modified to extend the cutting area in the Y axis and to use a standard Replimat controller.

It makes use of an 18mm GaSe focus lens with 55mm focal length. (add lightobject link)

Firmware is on github, here

The laser is controlled by sending commands ("g codes") to it via USB->serial connection. Additionally, the laser control electronics can read files containing these commands from an inserted SD card without the aid of an attached computer.

There are several ways to command the laser to fire, each is enabled or disabled at compile time, according to the following option in Configuration.h:

Each of these firing controls accepts the following parameters, which can also be manipulated without firing or moving the laser by using them with the M649 command:

In Continuous mode, the laser is turned on, and remains on at the selected intensity until it's instructed to turn off.

Pulsed mode fires punctuated bursts at intervals matching P: PULSES_PER_MM, each lasting for L: DURATION. That gives us all the information we need to time the laser firing and extinguishing from the inner loop of the stepper driver interrupt handler - the core of the firmware. This makes the positioning and timing of pulses in Pulsed mode much more accurate than any other method. Pulse positions are accurate to the nearest step in any axis and reliable minimum pulse times of 250 microseconds have been measured on a 16Mhz Atmega 2560 (better may be possible, but hasn't been tested). Stock Marlin's minimum pulse length is 8.2 milliseconds on the same hardware, and permits adjustments no smaller than 1 millisecond.

Raster mode is a special variation of Pulsed mode which allows you to specify a unique intensity for each pulse in a variable-length horizontal line of evenly spaced pulses, with configurable 'pixel' size and aspect ratio, arbitrary line-advance, and selectable left or right blitting. This is everything required for maximally efficient arbitrarily large 2D image blitting, but allows for a number of other uses as well. An obvious improvement would be to allow for Raster blitting along an arbitrary line in 3D space - patches welcome! Because pulse timing can be done in the stepper driver interrupt handler, and the information necessary for many pulses is contained in a single command, Raster mode is very fast. Raster mode only works with the “G7” command which accepts a number of unique parameters:

In firmware, you have two options for controlling a laser:

Single pin: The LASER_FIRE pin supplies a PWM signal at at Hz specified as LASER_PWM in Configuration.h, adjusting duty cycle of the wave to control intensity, and supplies logic level LOW when off. Common for laser diode

Two pin: The LASER_FIRE pin supplies a logic level signal HIGH for fire, LOW for extinguish. The LASER_INTENSITY pin supplies a PWM signal at at Hz specified as LASER_PWM in Configuration.h, adjusting duty cycle of the wave to control intensity.

This firmware also has options to control peripherals of a laser cutter such as the air assist, water pump or even idle shut off.