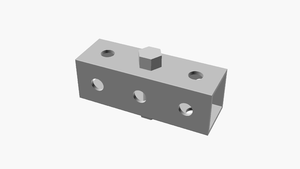 A bolt is a form of threaded fastener with an external male thread requiring a matching pre-formed female thread such as a nut. Bolts are very closely related to screws.

The distinction between a bolt and a screw is poorly-defined. The academic distinction, per Machinery's Handbook, is in their intended design: bolts are designed to pass through an unthreaded hole in a component and be fastened with the aid of a nut, although such a fastener can be used without a nut to tighten into a threaded component such as a nut-plate or tapped housing. Screws in contrast are used in components which contain their own thread, or to cut its own internal thread into them. This definition allows ambiguity in the description of a fastener depending on the application it is actually used for, and the terms screw and bolt are widely used by different people or in different countries to apply to the same or varying fastener.

Bolts are often used to make a bolted joint. This is a combination of the nut applying an axial clamping force and also the shank of the bolt acting as a dowel, pinning the joint against sideways shear forces. For this reason, many bolts have a plain unthreaded shank (called the grip length) as this makes for a better, stronger dowel. The presence of the unthreaded shank has often been given as characteristic of bolts vs. screws, but this is incidental to its use, rather than defining.

Bolted joints are reversible and easily disassembled, unlike screwed joints which may irreversibly transform the materials in use.