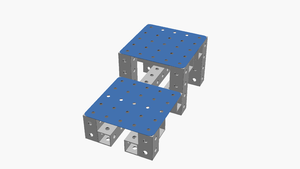 Step stools are half way between a ladder and a stool, being used, as a support platform, for reaching targets that are at heights between ~2m and ~3m. The most common modern type is made with two separate ladders connected to each other at the upper end, where there is a platform with an area big enough to stand with both feet on it, having the rest of steps the same area, but not in all models, for some step stools have classical ladder steps. This folding design arrangement eliminates the need for a fixed support on a wall, as in the case of a standard ladder. They are widely used in the kitchen, to the point that in some places they are called "kitchen ladder".