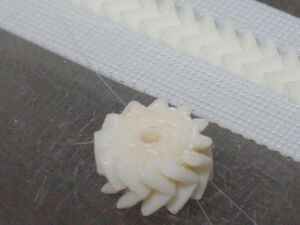 A gear is a rotating circular machine part having cut teeth or, in the case of a cogwheel or gearwheel, inserted teeth (called cogs), which mesh with another (compatible) toothed part to transmit (convert) torque and speed. The basic principle behind the operation of gears is analogous to the basic principle of levers. A gear may also be known informally as a cog. Geared devices can change the speed, torque, and direction of a power source. Gears of different sizes produce a change in torque, creating a mechanical advantage, through their gear ratio, and thus may be considered a simple machine. The rotational speeds, and the torques, of two meshing gears differ in proportion to their diameters. The teeth on the two meshing gears all have the same shape.

Two or more meshing gears, working in a sequence, are called a gear train or a transmission. The gears in a transmission are analogous to the wheels in a crossed, belt pulley system. An advantage of gears is that the teeth of a gear prevent slippage. In transmissions with multiple gear ratios—such as bicycles, motorcycles, and cars—the term "gear" (e.g., "first gear") refers to a gear ratio rather than an actual physical gear. The term describes similar devices, even when the gear ratio is continuous rather than discrete, or when the device does not actually contain gears, as in a continuously variable transmission.

Furthermore, a gear can mesh with a linear toothed part, called a rack, producing translation instead of rotation. A rack and pinion comprises a circular gear (the pinion) engaging a linear gear (the rack). Driving the pinion into rotation causes the rack to be driven linearly. Driving the rack linearly will cause the pinion to be driven into a rotation. A rack and pinion drive can use both straight and helical gears. Though some suggest Helical gears are noted for “quieter” operation, there is no science to support this theory. Helical racks while being more affordable, have proven to increase side torque on the datums, increasing operating temperature leading to premature wear. Straight racks require a lower driving force and offer increased torque and speed per percentage of gear ratio which allows lower operating temperature and lessens viscal friction and energy use. The maximum force that can be transmitted in a rack and pinion mechanism is determined by the tooth pitch and the size of the pinion as well as the gear ratio.

For example, in a rack railway, the rotation of a pinion mounted on a locomotive or a railroad car engages a rack placed between the rails and helps to move the train up a steep gradient.

For every pair of conjugate involute profile, there is a basic rack. This basic rack is the profile of the conjugate gear of infinite pitch radius (i.e. a toothed straight edge).

A generating rack is a rack outline used to indicate tooth details and dimensions for the design of a generating tool, such as a hob or a gear shaper cutter.

We need gear families that all work with each other. From popular construction toys to big Iron like 40mm and 100mm frames.

Hybrid fabrication; RepRapping and then precise tidying of each layer with a milling/routing head is the most promising.

2D cuts can be stacked, with through holes for bolts to provide alignment and compression, allowing for the construction of sturdy power transmission components for keyed shafts.