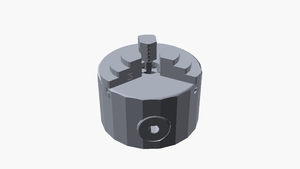 Chucks commonly use jaws to hold the tool or workpiece. The jaws (sometimes called dogs) are typically arranged in a radially symmetrical pattern like the points of a star. Jawed chucks may require a wrench-like device called a chuck key to be tightened or loosened, but other jawed chucks may be tightened or loosened by hand force alone, offering convenience at the expense of gripping force. Chucks on some lathes have jaws that move independently, allowing them to hold irregularly shaped objects. More complex designs might include specially shaped jaws, greater numbers of jaws, or quick-release mechanisms.

Instead of jaws, a chuck may use magnetism, vacuum, or collets, which are flexible collars or sleeves that fit closely around the tool or workpiece and grip it when squeezed.