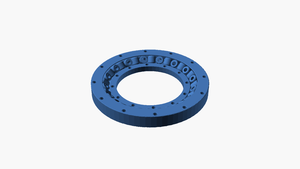 A slewing bearing or slew[ing] ring (also called a turntable bearing) is a rotational rolling-element bearing that typically supports a heavy but slow-turning or slowly-oscillating loads in combination (axial, radial and moment loads), often a horizontal platform such as a conventional crane, a swing yarder, or the wind-facing platform of a horizontal-axis (yaw) windmill. In other orientations (e.g. a horizontal axis of rotation) they are used in materials handling grapples, forklift attachments, welding turnover jigs and so on.

Compared to a "normal" ball bearing the rings are quite wide and usually have holes drilled in them to provide fixation to a structure. Seals can be provided between the rings to protect the rolling elements. Compared to other rolling-element bearings, slewing bearings are relatively thin section and require that the structure to which they are bolted is stiff enough so that under load predefined limits of distortion are not exceeded.

Slewing rings range in size from as little as 100mm diameter to well over 15,000mm.