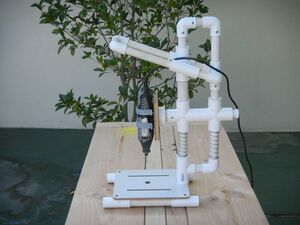 A drill press (also known as a pedestal drill, pillar drill, or bench drill) is a style of drill that may be mounted on a stand or bolted to the floor or workbench. Portable models are made, some including a magnetic base. Major components include a base, column (or pillar), adjustable table, spindle, chuck, and drill head, usually driven by an electric motor. The head typically has a set of three handles radiating from a central hub that are turned to move the spindle and chuck vertically. A drill press is typically measured by its "swing", calculated as twice the distance from the center of the chuck to the closest edge of the column. Thus, a tool with 4" between chuck center and column edge is described as an 8" drill press.