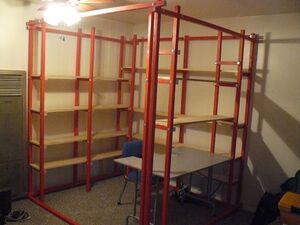 A cubicle is a partially enclosed office workspace that is separated from neighboring workspaces by partitions that are usually 5–6 feet (1.5–1.8 m) tall. Its purpose is to isolate office workers and managers from the sights and noises of an open workspace so that they may concentrate with fewer distractions. Cubicles are composed of modular elements such as walls, work surfaces, overhead bins, drawers, and shelving, which can be configured depending on the user's needs. Installation is generally performed by trained personnel, although some cubicles allow configuration changes to be performed by users without specific training.

I had to live away from home for ten months (in a little, tiny, cheap, studio appartment) due to job requirements. I took a lot of my (hobby) tools and supplies with me and quickly got tired of hunting through boxes stacked on top of boxes (see Before picture).

I first priced some large heavy duty shelving units at the local big box store and it ran into several hundred dollars. I decided I could do better than that and have a nice cubicle customized to my needs.

This cubicle is built of about 30 2x2s for framing, 1x10s for shelving, hardware consists of 1/4 inch nuts, bolts, and lock and fender washers. A few deck screws secure the shelves. I wasn't sure the 2x2s were going to be strong enough, but with the intermediate supports in the middle of each side, its plenty strong. I had the red paint and some of the wood, and the desk its built around, but I think the whole thing could be done for around $100 max. Far cheaper than equivalent amount of store bought shelves!

Two sides are against walls, and two sides are open beyond the cube, which helps keep me from getting claustrophobic. But, that's not a problem for me - I love this space!

My finished size came out to about 7 x 7 x 7 foot cube. I first envisioned a cube within a cube with the space between them filled with shelves. But, as the design developed, it ended up being constructed as a series of "ladders" going around the area - you can see this in the build sequence pictures. Notice I had to stagger the level of shelves from one side to the adjoining sides.

UPDATE: SIZE MATTERS!! I have since moved back home, and had to re-size my cubicle. It is now about 5.5 x 6 foot - I'm still getting used to it... My feeling is this is a bit too small to be comfortable, but maybe that's because I had it bigger for so long. I have a workshop in a basement room, but my wife let me put the cubicle up between the living room and kitchen - albeit, a smaller version. It's a compromise for both of us. This way, I don't disappear for hours at a time; I'm in my cubicle, and she's watching Pride & Prejudice, and we coexist happily! (There's a little bargaining power there for those whose spouse may not be keen on having a Mancave... or, cubicle, in the middle of the house!)